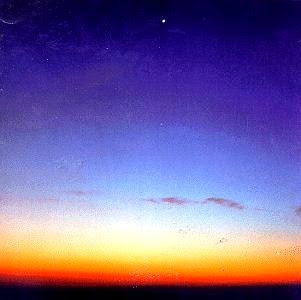 Seemingly emerging out of nowhere following an initial single or two, Flying Saucer Attack's debut album crystallized an incipient 1990s underground as in thrall to folk music as to feedback blasts and Krautrock influences. The description the band members themselves used, also considered by some as an alternate title to this album, was "rural psychedelia," and rarely has form so readily followed function. The original duo of Pearce and Brook, with some help from friend/Third Eye Foundation mainman Matt Elliott on percussion and clarinet (thus creating an even more alien atmosphere on "Moonset"), created a thick, evocatively haunting collection of modern mind-blowers. If any one thing could be singled out about the album, it's the continual contrast between Pearce's soft, reflective singing, often sunk deep into the overall mix and treated with heavy-duty echo, and his often tremendous guitar work, electric squalls, and drones piled atop one another. Songs like the exultant "Wish" and "A Silent Tide" are the breathtaking results. Initial comparisons were made to My Bloody Valentine and the shoegazing crowd, but they're misplaced -- it's a consciously different style employing some similar elements, but with notably varying results. Two astonishing drone/tribal instrumentals are named "Popol Vuh 2" and "Popol Vuh 1," both open tips of the hat to the long-lived German experimental group. The completely out-of-left-field number, though, is the cover of Suede's "The Drowners" -- changing nothing about the pace but overdriving the feedback and relentlessly toning down the vocals, FSA turn the neo-glam piece into a noisefest beyond description. Compared to later albums, Flying Saucer Attack sets more of an immediately consistent mood -- some numbers aside, the dreamy singing, the seemingly straightforward guitar parts that get more involved the more one listens, and more continue from track to track, generally speaking. The end results, though, are more than worth it.
Posted by Blackeyed Donkey at 1:01 AM

nice one mate, haven't heard FSA in a while.