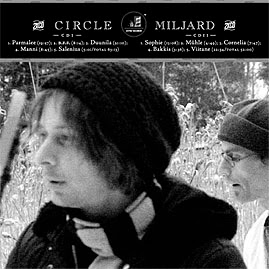 Circle is a band that loves to keep its fans guessing; some of their forays into unexpected genres tend to confound, but a true fan will always find what they love about these Finnish experimentalists no matter the direction they take, be it psychedelic, noise, drone, folk, free jazz, or their self-coined genre, the New Wave of Finnish Heavy Metal. They always manage to sound like Circle, in that their musical motifs are always circular, cyclical, repetitive... and extremely hypnotic. Do not attempt to operate heavy machinery while listening to Circle! The majority of their work, be it the motorik "speed kraut" drive of the bulk of their earlier material, the prog leanings of Katapult, the absurdist experiments of Arkades, the damaged folk-blues of Forest, the dronescapes mixed with oldschool punk (?!) of Panic, or even the metallic edge of Sunrise (so sincere it's almost indistinguishable from Judas Priest!). But this diversity never comes off like a gimmick - in this case Circle has delved into a realm not far from the much-maligned genre of New Age music, albeit closer to the kind associated with avant gardists like Steve Reich, Terry Reilly or John Cage, over this expansive 2CD set. Again, the effect is trance-inducing, only instead of relentless pummeling they take the opposite tack with lengthy, sprawling, amorphous pastorals, with nary a drum kit or distorted guitar in sight. The instrumentation - consisting of tinkling crystalline keys, exploratory piano musings, spare simplistic guitar and bass lines, in addition to various samples, drones and found sounds both disorienting and soothing - is subtle yet insistent enough to fully involve the listener rather than allowing itself to be relegated to the background. And while this collection is less immediate and takes more patience than most Circle material, it is no less rewarding to listeners who allows themselves to be transported and lulled into dreamy contemplation. It's the perfect soundtrack for a couple lost hours sitting by a placid pool in an enchanted forest watching the reflective water slowly eddy and the fairy dust float through sunbeams. It's that mesmerizing. Miljard is not the best place for the uninitiated to start (that would be Meronia or Andexelt), it nevertheless suffices as yet another captivating guise for this chameleon-like enigma of a band.
Disc1
Disc2
Posted by Blackeyed Donkey at 6:10 PM

This is SO nice! I have Sunrise and Meronia, but have sort of fallen off the bandwagon for awhile. Listening to disc 2 right now and am finding myself a FULL BLOWN Circle fan once again. Thanks for sharing...!

If you like this, you MUST try CIrcle's Tower!