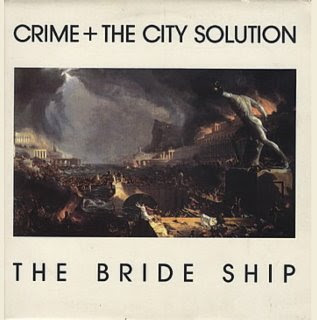 Starting with "The Shadow of No Man," the band's zoned atmospherics accentuated by both a nicely grimy keyboard drone and brisk pace, Crime & the City Solution continue carving its own strange path. The same lineup from Shine reappears here -- keyboardist Chris Haas appears only as an auxiliary member, but still adds to the music here and there, while Mick Harvey doubtless contributes most of the organ work. Simon Bonney continues to evolve into more of his own man -- if anything, he's embracing country and western more explicitly in his singing style, where Nick Cave would prefer blues and Vegas-style show tunes. He takes over the lion's share of the lyrics this time as well, again working with the mix of sometimes cryptic, sometimes concrete imagery of empty landscapes, forlorn towns, ill-lit city streets and the people who live there. In terms of performance, the lineup carries out its shadowy brief well once again -- Alexander Hacke sounds a little more integrated into the mix than before, as well as a touch more prominent, while Harvey's peerless drumming remains a delight. Bronwyn Adams, meanwhile, still performs her violin with skill and haunting style. A number of interesting approaches surface -- consider the deeply funky guitar/keyboard intro to "Stone," which gives the track a major boost of power as well as nicely sitting apart from the band's usual approach. The second half of the album consists of a suite of songs called "The Bride Ship," starting with the track of that name and continuing through "Free World" and "New World." Bonney sometimes sounds far more like Cave than ever, but otherwise, it's a dramatic convolution of everything from Moby Dick to modern apocalypse, with appropriately doom-laden backing. The CD version includes B-side -- "Three/Four," an okay enough track, and an alternate take on "The Bridge Ship."
Posted by Blackeyed Donkey at 4:14 PM