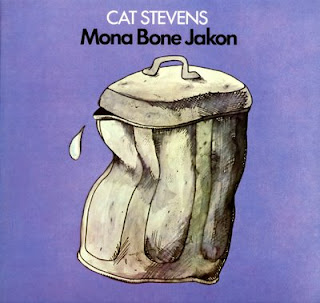 Cat Stevens virtually disappeared from the British pop scene in 1968, at the age of 20, after a meteoric start to his career. He had contracted tuberculosis and spent a year recovering, from both his illness and the strain of being a teenage pop star, before returning to action in the spring of 1970 -- as a very different 22-year-old -- with Mona Bone Jakon. Fans who knew him from 1967 must have been surprised. Under the production aegis of former Yardbird Paul Samwell-Smith, he introduced a group of simple, heartfelt songs played in spare arrangements on acoustic guitars and keyboards and driven by a restrained rhythm section. Built on folk and blues structures, but with characteristically compelling melodies, Stevens' new compositions were tentative, fragmentary statements that alluded to his recent "Trouble," including the triviality of being a "Pop Star." But these were the words of a desperate man in search of salvation. Mona Bone Jakon was dominated by images of death, but the album was also about survival and hope. Stevens' craggy voice, with its odd breaks of tone and occasional huskiness, lent these sometimes sketchy songs depth, and the understated instrumentation further emphasized their seriousness. If Stevens was working out private demons on Mona Bone Jakon, he was well attuned to a similar world-weariness in pop culture. His listeners may not have shared his exact experience, but after the 1960s they certainly understood his sense of being wounded, his spiritual yearning, and his hesitant optimism. Mona Bone Jakon was only a modest success upon its initial release, but it attracted attention in the wake of the commercial breakthrough of its follow-up, Tea for the Tillerman.
Posted by Blackeyed Donkey at 4:35 PM