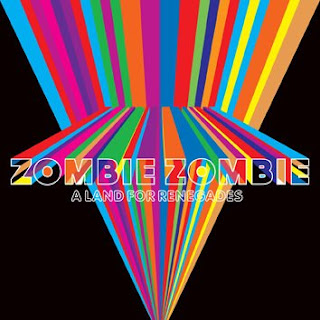 A Land For Renegades

This is the debut full-length release from Paris' Zombie Zombie. This project is lead by two people, Etienne Jaumet and Cosmicneman (from Herman Dune) using sound and rhythm to explore the feeling of fear growing deep inside of you. Listening to their music, you will go through different emotional stages, especially when they play with the analog effects of instruments like the Theremin, keyboards, or space echo tape-delay pedal. Also, the provocative drumming and the screams will make your heart beat faster, like in a horror movie -- when your car won't start, and someone's trying to kill you. These are the types of feelings this duo try to reproduce in their music, also inspired by horror movie soundtracks from George Romero, John Carpenter, and music from bands like Goblin, Suicide, Raymond Scott, Silver Apples or Can. After their first 12" release on the Parisian record label Boombomtchak Records, this album was recorded and mixed by Antoine Gaillet in their research lab, in the Paris heat of August 2006. They also invited extra musicians such as guitar players from the bands Turzi, Herman Dune and Friction. Since then, they've been playing in small clubs in Europe, and also music festivals with big names like Jean Jacques Perrey, The Chap, ESG, James Chance and Sonic Boom.
Posted by Blackeyed Donkey at 4:36 PM