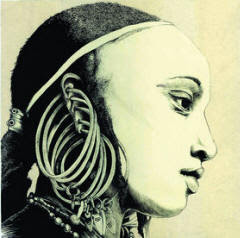 A few years back, former Quiet Sun / Roxy Music / 801 behind-the-scenes mastermind Gill Manzanera--no relation to guitarist Phil Manzanera (whose real name is Philip Targett-Adams)--offered up a beguiling reminiscence of those heady days to the Swiss fanzine Sombre Reptiles:
"What we were trying to do, you see, was harness the future into the present. However, we were severely at odds with technology, a ring modulator on a Fender Rhodes and a bit of funny business through an analog synth being about as far as one could go then. The work with Quiet Sun was the foundation, then later Phil and Eno built upon that within Roxy and if only Ferry had acquiesced to Brian having a go at 'Bogus Man,' I think the results would have been stunning (as well as longer-lasting). But alas, so then for 801, the decision was to incorporate the progressive and avant garde through a chamber of fusion (so to speak), the results of which are undeniable. Mind you, this was all during the burgeoning punk era, so it took a bit of time for some to settle in with what was happening. But isn't that the future, really; someone has to be the first out the door to know if the rest of us will need a jumper or not. It was all quite brilliant in that way, absolutely so, I should think."

Hmm, well, that all sounds... quite English. Oddly enough, that sliver of quinine-sotted nostalgia could be used as a swab of historical DNA pap to describe the fantastic newest shimmer from Blues Control. While past releases have been beauteous extrapolations into the miasmic core of psychedelia and billowing fog of ambient space, Local Flavor is the one where all the chickens have come home to roost.

The opening track "Good Morning" is practically a sideways step into boogie rock (horn accompaniment provided by none other than Jesse Trbovich and Kurt Vile); with the proper seismic shift, it could almost be heard as an alternate reality take on "Re-make/Re-model." It's easily the band's longest stomp in the forest of rock since their debut cassette, and, man, them boots leave a bruise!

The remaining three tracks morph and ebb harmoniously--in true Blues Control fashion--the timbre occasionally elegiac, yet more often riffing on a plane that has yet to be transcribed. Local Flavor is 801 plus an extra one (8101, if you will), providing an unimaginable future that will take your breath away. So make sure you've paid your oxygen bill, because there are no free rides in the 82nd Century.
Posted by Blackeyed Donkey at 10:34 PM

Great article - thanks! It is so important for people to do their homework when choosing Low Milage engine related Topics. If you're interested to know about online Low milage Engine, avail the best rebates & discounts on the web , checkout the site with all related great information's..... http://www.lowmileageengines.com/
Regards,

wow, thanks gmc engines. oh, and the blues control posting is good too :)

Good music and a smooth-running automobile. Thanks, internet!