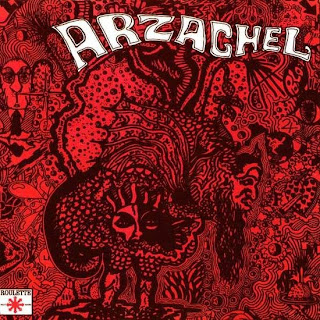 Collectors of rare psychedelia recognize Arzachel's sole LP as being one of the most desired (and pricey) relics from the late '60s. The record was initially released in England on the obscure Evolution label and later in America on Roulette. Unlike most monster psych collectors' albums, however, Arzachel had two things which helped transition it to the CD era: the music is a head above most other psych rarities, and the four musicians later achieved marginal success within the '70s progressive rock "Canterbury scene."

The band initially called themselves Uriel and formed in December, 1967 after guitarists Dave Stewart (not the one from the Eurythmics) and Steve Hillage met in math class at the City of London School. After recruiting lead vocalist/bassist Hugo Montgomery Campbell (Mont Campbell), Stewart soon realized Hillage was the better axeman and switched to organ. Drummer Clive Brooks was discovered via an ad in Melody Maker magazine. Uriel then secured a summer residency at an Isle of Wight hotel called Ryde Castle. They also were filmed for an English sex education film and came close to jamming with Jimi Hendrix after meeting him on a London street.

According to Hillage, their one album was "done for a laugh really. Somebody gave us a day in the studio, and we made a psychedelic album!" But the record wasn't released until after Hillage quit Uriel to attend college in Canterbury (he later played with both Kevin Ayers and Gong before going solo). Stewart, Campbell, and Brooks carried on as the classical rock trio Egg. The Uriel album made with Hillage was released in 1969 under the name Arzachel, with fictional names and bios of the musicians to avoid contractual difficulties. The record itself featured some of the most explosive psychedelia by an English group, but without any promotion, it quickly plunged into obscurity. It was years later before collectors started depleting their bank accounts to obtain what few copies of Arzachel were originally released.
Posted by Blackeyed Donkey at 11:57 AM