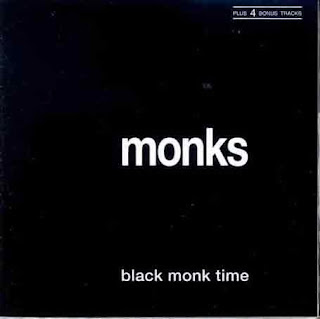 One of the strangest stories in rock history, the Monks were formed in the early '60s by American G.I.s stationed in Germany. After their discharge, the group stayed on in Germany as the Torquays, a fairly standard beat band. After changing their name to the Monks in the mid-'60s, they also changed their music, attitude, and appearance radically. Gone were standard oldie covers, replaced by furious, minimalist original material that anticipated the blunt, harsh commentary of the punk era. Their insistent rhythms recalled martial beats and polkas as much as garage rock, and the weirdness quotient was heightened by electric banjo, berserk organ runs, and occasional bursts of feedback guitar. To prove that they meant business, the Monks shaved the top of their heads and performed their songs -- crude diatribes about the Vietnam war, dehumanized society, and love/hate affairs with girls -- in actual monks' clothing.

This was pretty strong stuff for 1966 Germany, and their shocking repertoire and attire were received with more confusion than hostility or warm praise. Well known in Germany as a live act, their sole album and several singles didn't take off in a big way and were never released in the U.S., it was rumored, because the lyrical content was deemed too shocking. They disbanded in confusion around 1967, but their album -- one of the most oddball constructions in all of rock -- gained a cult following among collectors, and has ironically made them much more popular and influential on an international level than they were during their lifetime. Bassist Eddie Shaw's 1994 autobiography, Black Monk Time, is a fascinating narrative of the Monks' stranger-than-fiction story.

The Monks' only album, "Black Monk Time", is packed with angst anthems on the order of "Shut Up," "I Hate You," "Complication," and "Drunken Maria." One of the strangest recordings of all time, it's now finally available in the U.S. as a 1997 CD reissue on Infinite Zero. The repackage is made all the more appealing with the inclusion of their two later non-LP singles, the live 1966 "Monk Chant," and a couple of 1965 demos, making it the definitive document of the Monks' recorded legacy.
Posted by Blackeyed Donkey at 10:07 PM

Great Post! I have to credit MES/The Fall for my intro to the Monks back in the late 80's with the album Extricate (Black Monk Theme/I hate you) and then in early 90's with Middle Class Revolt (Shut up!).

And I have to credit their friar-inspired tonsures as the raw source of their powers and musical inspiration. There is great power in a tonsure.