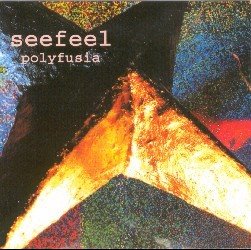 Their music is ostensibly instrumental but not because it doesn't have voices; in fact many of their songs do have voices, but voices as fundamental instruments of sound rather than as the lead sound. The CD tracks are long pieces, firmly minimalist, with not much to ground them except repetitive bass and percussion, based loosely around a dub influence. In fact, were it not for the bass/drum backbone, the sounds would pretty much float out into total ambience, with nothing to hold onto. They use guitars, sequencers, electronics, synthesizers, and voices to create a brilliant mix that is utterly unlike anything else. OK, maybe that's not true: there were/are many others who have worked in a similar vein (Aphex Twin, Autechre, etc.), mining the possibilities of electronic repetition with ethereal-sounding music that is about texture rather than narrative. What makes Seefeel unique is that the quality of their work is superb, on a completely different level than all their peers (and they didn't have many) and more so, of the many people who came after them. And even more a dozen years after these recordings, their music sounds just as out of touch and out of sequence with anything that you might hear in 2006.


This particular album is not really an album since it's an amalgamation of two e.p.'s, the 4-song More Like Space and the 6-song pure, impure, both originally released in 1993. The title track from the former is quite literally one of the most brilliant pieces of music ever recorded, nearly nine minutes of repetition that is all about tones and textures, slowly and imperceptibly building, ebbing, lifting up to who knows where.


Who were Seefeel? They were basically Mark Clifford (guitars and the main guy), Sarah Peacock (guitars, whose lovely vocals provide the ethereal counterpoint), Daren Seymour (bass, radio), and Justin Fletcher (rhythm programming). They released their first proper album, the hour-long Quique (a lovely phonetic invention) in 1994 that was more an extension of the first two e.p.s rather than a major departure, although by the time you get to the final tracks on the album, it's clear that the band is now heading into territory that is without structure or reference to anything that one might recognize. An obvious reference point here is Aphex Twin, and indeed, Aphex Twin remixed several Seefeel tracks around this time (some of them featured on the Polyfusia compilation). Fred