The Wackness-Music From the Motion Picture 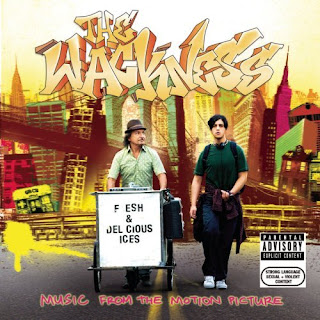 The Wackness is a coming of age story about sex, drugs, music and what it takes to be a man. NYC in the summer of 1994. Girls were fly, the music was dope, the heat was on and Luke was just trying to deal. The soundtrack features classic period hip hop and R&B tracks from legendary Hip Hop icons like Wu-Tang Clan, Nas, A Tribe Called Quest, KRS-One, D.J. Jazzy Jeff and The Fresh Prince, R. Kelly and more. Starring Josh Peck, Ben Kingsley, Famke Janssen, Olivia Thirlby, Mary Kate Olsen and Method Man. The Wackness tells the story of a troubled teenage drug dealer who trades pot for therapy sessions with a drug addled psychiatrist. Things get more complicated when the kid falls for one of his classmates, who just happens to be the doctor's daughter. Set against the backdrop of the greatest year in Hip Hop history.

Posted by Blackeyed Donkey at 7:00 PM

So funny you posted this. I really love this movie. Could it be any more right on with the music. The bestest. P.S. Hi Andy Pants!
- Marjorie