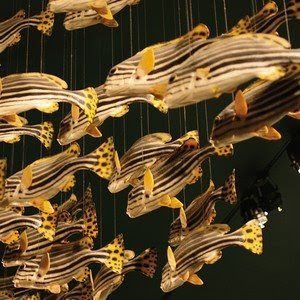 Although this eponymous album may be the debut from occasional New Yorker Fred Thomas, he's far from a newcomer to the scene. Rather he has spent most of his life in search of the perfect pop music, first as the frontman/mastermind of Saturday Looks Good To Me and now under his oddly monikered solo project. Apparently the name comes from European tours where the sign 'City Center' was such a regular (and reliable) sight, but gives few clues to the unknown pleasures held within Fred's music.

Taking cues from the skewed pop music of Arthur Russell on one side and Brian Wilson by way of Panda Bear on the other, Fred has channelled an outsider pop masterwork. Thick waves of decomposing electronics and processed instruments (is it gamelan? Is it something else altogether?) crash and fizz beneath Fred's singular chanting vocals. There's a sense that someone, somewhere might be singing along to these songs, but hearing them on mainstream radio might be pushing it a little too far. Sandwiched in-between three-minute pop marvels such as opener 'Killer Whale' and the stand-out 'Summer School' are extended ambient experimentations, but unlike the occasionally academic workouts you might expect from Type these feel organic and distinctly home-brewed.

There is something magical about Fred Thomas's distinct and original musical creations, something that grabs you and won't let go. We're not entirely certain what that is but we're sure if you give City Center a try you'll feel exactly the same as we do. Pop music has rarely sounded so warm or quite so open hearted...
Posted by Blackeyed Donkey at 6:44 PM