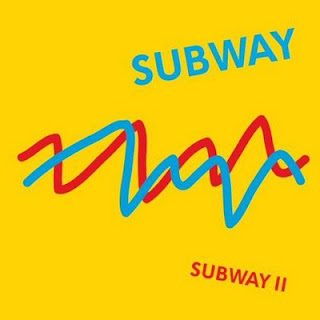 Subway are Michael Kirkman and Alan James and have been releasing music since 2000. Subway II was recorded at home in East London using a plethora of analog equipment and techniques that enabled them to create sound reflecting cityscapes such as Berlin, Dussseldorf, Detroit and Paris whilst at the same time creating a contemporary musical commentary of London in 2009.

This album is a cosmic progression of post-dance music, focused more on meditative thought and space than one made for the dancefloor, yet still encompassing the rhythm and constant beat at the heart.

Their most recent appearance is on Soul Jazz Records Singles 2008-9 alongside Kode9, Digital Mystikz, Tetine, Secondo, Ramadanman and other forward thinking electronic pioneers.

With three previous sell-out singles on Soul Jazz Records (Simplex, Satellites and 4410), an album ‘Empty Head’ (released in 2005) as well as a string of one-off projects, the group are currently name-checked by everyone from Hot Chip to DFA, Prinz Thomas to Carl Craig, with good reason.

‘Subway II’ is a fitting conceptual statement of their current sound. Cosmic, post-dance, organic, meditative and hypnotic.
Posted by Blackeyed Donkey at 12:56 PM

Was listening to this yesterday and even posted a song. But, I don't have the whole thing, thanks!