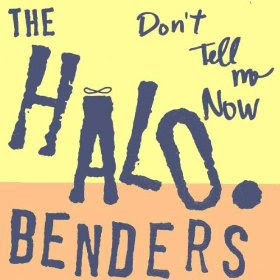 Don't Tell Me Now sees Calvin Johnson's baritone and Doug Martsch's high-pitched whine working with and against each other to catchy effect. Lyrically obtuse, with subject matter praising draft dodgers as heroes and a supremely catchy theme song about themselves, the Halo Benders create a guitar-heavy indie poptopia throughout the album. Martsch might not attack his guitar in as epic a fashion as he does with Built to Spill, but his trademark sound is on display throughout. Built to Spill fans might consider this a Built to Spill album as recorded by Martsch at a circus. If that metaphor holds up, Johnson becomes the ringleader, singing about all sorts of mundane things and randomly spouting clichés. Martsch in turn becomes the more serious guitar god and a more realistic conscience. The album might seem scatterbrained, but the mix of vocal styles makes for charming harmonies amid mostly enjoyable hooks. God Don't Make No Junk might be a little more charming and The Rebel's Not In might be better produced and more melodic, but Don't Tell Me Now has more than a few diamonds in its rough. It might be smart to note that each album contains a contraction in its title, as the fractured nature of the music suggests a similar fusing of two styles: Johnson's arch wit with Martsch's brave sonic force and heartfelt emotion. Don't Tell Me Now isn't a great rock & roll album, but it's as fun to listen to as it must have been to record.
Posted by Blackeyed Donkey at 1:04 PM

Quite worthwhile info, thank you for the article.