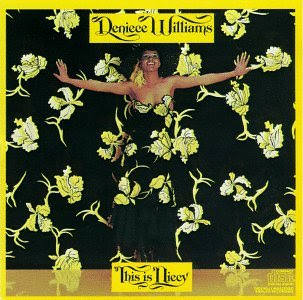 Deniece Williams spent the first half of the '70s establishing herself as a background vocalist for an impressive line of artists, including Stevie Wonder, Minnie Riperton, Roberta Flack, and Esther Phillips. Though she'd continue to do session work throughout her career, she also became accomplished as a solo artist. Unfortunately, a lot of people think she came out of nowhere for 1984's "Let's Hear It for the Boy," a number one pop hit, but she was making excellent albums as early as 1976. The songs that would eventually make up her debut, This Is Niecy, were sent to Earth, Wind & Fire. Williams didn't intend to make her own album and thought these songs would be a good fit for Philip Bailey. Instead, she got to record them with most of EW&F, including Maurice White and Charles Stepney as producers, Verdine White on bass, Freddie White on drums, those glorious horns, and several other associates of the group. Three of the album's seven songs were released as singles, and they're all stunners, each with its own mood and style (fittingly, one peaked on the disco chart, one hit the Top 30 of the pop chart, and one scraped the black singles chart). The best of the lot is "Free," a subtle but powerful sparkler that expressed Williams' desire to break from the more traditional lifestyle that had been mapped out for her. Out of everything she recorded, this low-key song demonstrates most how her time with Riperton and Syreeta rubbed off on her, showing how a bedroom whisper can be just as affecting as an in-the-red wail. Also containing strong album cuts, This Is Niecy is a great complement to Earth, Wind & Fire's Spirit, released the same year -- not only for its overlapping personnel, but also for its greatness.
Posted by Blackeyed Donkey at 1:15 PM

For my part every person ought to go through it.