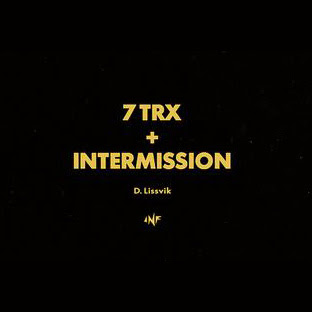 Without vocals and with track numbers over titles, Lissvik foregoes Studio's emphasis on trance-clatter and repetition. In their place are rippling Factory Records guitars, the barest rhythms and a decidedly Eastern-influenced spiritualism, making for an album that nurtures the spare and serene. He draws shapes and symbols in the sand out of lean, serpentine guitars, each open to the listener's angle of sight. Without partner Rasmus Hägg's synth shading, Lissvik's imagery is fit more for the desert than the beach, designed around great clean spaces without people or moving things to distract, just sound and silence in an odd tandem.

Despite the emphasis on his ruminative side though, Lissvik hasn't completely neglected his band's taste for big-eyed joy. The album's longest excursion, "A3," shifts from boat holiday guitars into a breezy freeway spin atop hand drums and brawny bass, while "A4" makes easy Saturday night disco out of electronic piano and jaunty wood-cowbell rhythms, a kind of polyester anthem as cheap and delightfully fruitful as its opening chords suggest. "B2" best resembles Studio's knack for the hypnotic strut though; Lissvik filters quiet Eastern tones into a wanderer's dance jam, alternating the dim and contemplative with a more open-collared bass heavy approach.

But it's clear that Lissvik's relying on open-vista psychedelia to carry the mood for most of 7 Trx + Intermission. "A1" turns a Spanish guitar intro into a curtain parting for a Sergio Leone film—one of the tense train depot scenes before all hell breaks loose—while "A2" is dressed in enough vague mysticism and candle-lit ambience for an early Doors track. "B1" makes for a kind of mystical Bazaar interlude, swapping out Villalobos' ethnic playgrounding for more solitary spoils. Blending tropical bird noises and what sound like sampled hand-drum patterns into a calm morning alarm that might gently coax you from your sleep, it's "B3" that generates quite a spell for such short length.

For a member of a band that's always relied so heavily on the intoxication of repetition, this assured short-form design sometimes feels like a welcome new direction. After all: Yearbook 3 is probably still at least a year away. While we wait, Lissvik's solo debut marks not so much a holding pattern as a distraction well worth our winter attention on its own.
Posted by Blackeyed Donkey at 3:45 PM