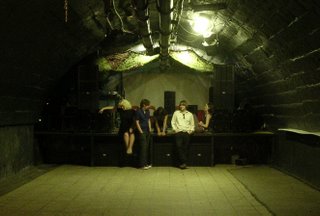 The Flowers Of Hell are a London based 10 person collective encompassing side players for British Sea Power, The Tindersticks and The Early Years, with guest involvement from members of Death In Vegas and Spacemen 3. The group mix orchestral instruments with drones and twangy guitars, creating a sound which is reminiscent of The Velvet Underground & Nico and early Spiritualized, mixed with a classical twist.

Produced by Tim Holmes of Death In Vegas at the Contino Rooms, their self titled debut album comes out in November 2006 on Earworm Records and follows a trio of releases for the Shifty Disco label’s singles club in 2005. Sonic Boom of Spacemen 3/Spectrum/E.A.R. collaborated with the group on ‘Through The F Hole’ and mentored the band during the recording of the album. For mastering, the group tracked down Denis Blackham who’s credits include Kraftwerk’s ‘Autobahn’ and classic releases from Elvis, The Who, Led Zeppelin, & T Rex.

Here is a full set from a gig in a nuclear bomb shelter under a castle in Slovakia.