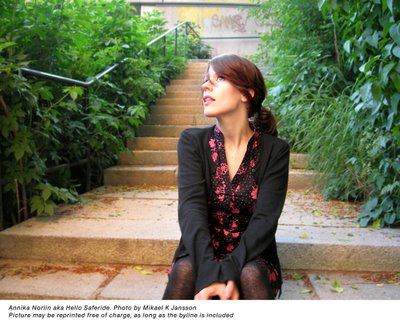 Literally hundreds of articles published in 2006 have clamored to tell us about how Lily Allen, Arctic Monkeys, or Sandi Thom have used the internet in their rise to fame. But while the media can drop as much pseudo-science about “MySpaces” or “web casts” as they want, these acts have actually followed fairly conventional routes into the public consciousness: PR companies, street teams, money. The end result? No.1 singles and hit albums. Meet the new biz. Same as the old biz. The 21 songs so far recorded by the Swedish act Hello Saferide, on the other hand, truly seem shaped by these new technological frontiers. They’re catchy, quirky, and interesting—the kind of thing you might download on a whim. It’s only a few listens later that some of the words or a musical phrasing hit home and these silly indie-pop songs blindside you with an unexpected poignancy. It’s schtick but it sticks.

“Highschool Stalker,” the song that first brought 24 year-old Annika Norlin and her varying band of instrumentalists and backup singers to wider attention, encapsulates Hello Saferide’s metier. Over guitar, handclaps, and trumpet Norlin details her amusing attempts to keep tabs on an unsuspecting beau. She steals dentist’s records and meets ex-girlfriends; she finds his yearbook; she’s “been on the Altavista… twice on the Yahoo.” You listen again to try and catch all the little gags and suddenly the naïveté cuts to the bone; she sings “It’s your birthday tomorrow, but I’m not supposed to know.” Over a muted trumpet her thin voice catches on the kamikaze optimism of every unrequited teenage crush. “The Quiz” plays a similar trick. It details the mundane particulars of a relationship, asking a number of questions seemingly designed to check her potential partner’s compatibility. Then the chorus turns serious, demanding the kind of commitment and care for which pop songs rarely prepare you.