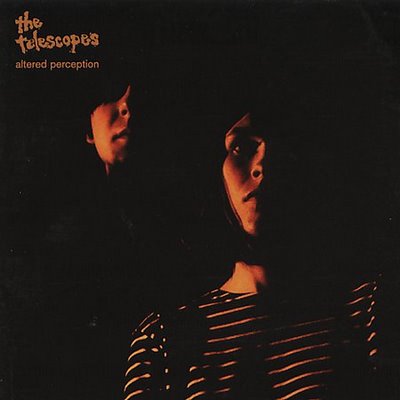 The Telescopes were formed in 1987 by Stephen Lawrie. Their debut release was a split flexi disc with Loop on the Cheree label in 1988. There followed their debut single, "Kick the Wall", and "7th# Disaster" also on Cheree Records. They moved to What Goes On Records and released their debut LP, "Taste" and "The Perfect Needle" single which is perhaps their most famous song. A live album appeared on Fierce Records and following What Goes On’s bankruptcy they signed to Creation Records. A more laidback, baggy influenced sound followed and the band scraped the lower reaches of the UK singles chart with singles like "Flying", and released "The Telescopes", their second album, in 1992. It was a commercial failure and the band disappeared from the public eye. In 2002 they made a surprise return with "The Third Wave" on Double Agent Records. By this time they were a core of just Stephen Lawrie and Jo Doran and were a much more experimental band specialising in electronic soundscapes. In 2005 they released their fourth album "The Telescopes #4" on their own Antenna Records.

Altered Perception is a compilation of sorts, collecting a handful of previously unreleased tracks as well as a few vinyl-only rarities. Part of the early nineties shoegazer scene, but only peripherally, the Telescopes took the dreamy bliss of My Bloody Valentine and dipped it in thick tarpits of distorted guitar, howled feedback, laconic vocals, landing them sonically much closer to Loop or Spacemen 3. In fact sometimes the similarities are uncanny. Which is not a bad thing. This is supreme drug/head music. Definitely music to take drugs to make music by.
Posted by Blackeyed Donkey at 4:47 PM