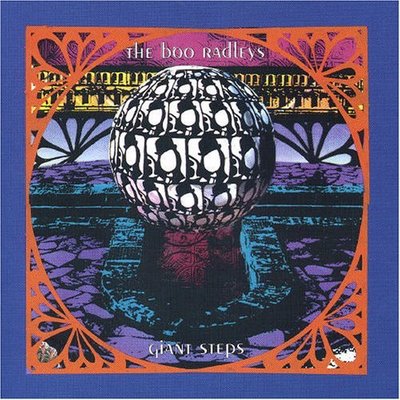 Proving that not all bands from Liverpool have influences that stop at The Beatles, The Boo Radleys’ third album is their undeniable classic, a wistful, exciting and perfectly-formed journey through a colourful musical universe. Formed in 1988 by school-friends Martin Carr and Sice as a vehicle for Carr’s songwriting and Sice’s angelic choirboy voice, the Boos meandered through Ichabod & I and Everything’s Alright Forever, two competent but uninspiring albums of My Bloody Valentine-derived guitar pop, before creating Giant Steps, their genre-bending and stellar zenith.

Stealing its name from John Coltrane and its melodies from the purest pop heaven can muster, Giant Steps saw The Boo Radleys taking hold of everything they loved about music, throwing it in a big box, shaking it around and then letting it back out again in weird and wonderful new forms that only they could have come up with. Weighing in at a bloated seventeen tracks and 64 minutes, the album ought to be a chore but isn’t, simply because there’s so much going on, so many ideas, so many hooks.

Essentially Giant Steps is an album of simple, well-crafted pop songs, but they are embellished and fleshed out in such marvellous, creative ways, and twist and turn in such weird and wonderful directions that they are transformed into something rather more absorbing and special. The Boo Radleys seem to throw almost everything at Martin Carr’s songs to see what sticks, from Beach Boys hooks to Loveless scree and back again via reggae, jazz and Dinosaur Jr., each song designed to be “a room with many doors”, or full of other, little songs. The epochal “Lazarus” both achieves and encompasses the band’s ambitions in spectacular style, phasing in on a gorgeous dub skank, drifting through acoustic reveries and exploding in a wordless chorus of technicolour guitar noise and heavenly brass, the sound of a life dumbstruck by glorious God-baiting noise.

The synergy between trumpet and guitar is a major key to the success of Giant Steps, both instruments veering between polar extremes. Steve Kitchen’s trumpet emits Motown-esque melodies at some points, and honks like Miles Davis’ most freeform jazz at others, while Martin Carr divides his guitar between simple pop riffs and exhilarating cacophonous squall. The two sides of Martin’s guitar are probably best illustrated by the sweet pop of “Wish I Was Skinny” with its simple melody and swirling fairground keyboards, and the post-MBV feedback of “Leaves And Sand”. The former is innocuous bubblegum pop, beguiling and sweet, while the latter lulls you with faint acoustic strumming before pummelling you senseless with gorgeous layered noise.

Few albums manage to be so expansive, so personal, so excitingly imaginative and so joyously pop all at the same time, but The Boo Radleys managed it here. This is a record about being a young man in a strange, sad and sometimes wonderful world, tired of injustice and fed-up of platitudes, a record about racing for the prize, catching dreams and smashing prejudices. This is a record about realising that what you were told was “normal” is actually abnormal and unnatural, a record about stepping outside and grabbing the world. “If you want it, take it all / there’s nothing cool about / having to go without...”

If you’re lucky, this is one of the most wonderful records you will ever hear.
Posted by Blackeyed Donkey at 7:13 PM

I loved Giant Steps too.

Sice is now in Paperlung - and here's their first video:

Well, I'll leave it up to your imagination.