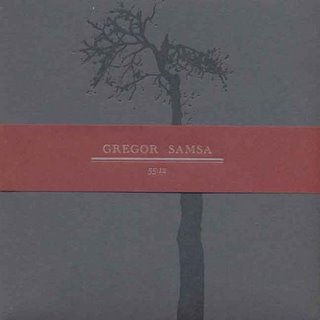 Originally from Richmond, VA, and now based in Brooklyn, this band exhibits a talent and grace well beyond their years. After the release of two stellar EP's, Gregor Samsa delivered their much anticipated debut full length55:12, an eight song journey submerged in dreamy, multi-layered atmospherics. The band blurs the lines of ambient and indie, from heavy and dark one moment to hushed and serene the next, all while angelic guy/girl vocals drift overhead.

The album was tracked at the Recorditorium in Richmond , engineered by Jason Laferrera and produced by Gregor Samsa. The mix was done by Brian Paulson (Slint, Wilco, Beck).

Posted by Blackeyed Donkey at 8:53 PM

Wow. Very cool music posted here. I found this blog while looking for info about the UK band The Telescopes (the link to which has already been deleted, damnit). But I've found some intriguing stuff here. Thanks. I'll be back often.