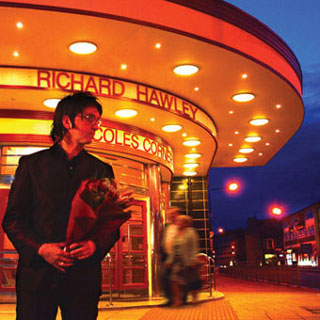 Today, there is no shortage of serious young men in groups, sketching out how they imagine the extremes and depths of emotion might be. Time was, though, that only those who had earned the right to sing of love, loss and striving would share such confidences - real singers, of the calibre of Scott Walker, Roy Orbison, or even Nancy's old dad, The Chairman himself.

Richard Hawley understands this. The man who could well be Britain's finest songwriter insists his mind is full only with "confused thoughts and Guinness". But when he sings, he does so in a voice that's deep and low, and does not lie. His merciful, wise songs tell of the heart's truths as seen in the dark, revealed by moonlight. Remember, this is the hopeless romantic who, on returning home from a lengthy tour of America was reduced to tears by the sight of a bottle of sauce - Sheffield delicacy Henderson's Relish - on his kitchen table.

Coles Corner, Richard's first album for Mute, was released on 5th September 2005. While his previous long-players, Late Night Final (2001) and Lowedges (2003), scaled remarkable heights of elegance and emotional candour, this collection is surely his best to date. Within, orchestral splendour sits alongside earthy rock and roll in songs that are by turns intimate and soaring.

So go with him as he leads you down to the ocean, or reveals the secret interior of a hotel room, or shows you the seductive open road. Take the string-led, alone-in-a-crowd title track, where Hawley's narrator walks the city at night and hopes that "Maybe there's someone waiting for me/ With a smile and a flower in her hair." A smouldering take on the same ambivalence that drives Petula Clark's Downtown, it's a telling foretaste of what else is coming down the wires. Born Under A Bad Sign, by contrast, is a drifting, country confessional for glockenspiel and guitar, which slow dances around autobiography and universal experience: "What are you like?/ You've had a right life/ Taken a long ride/ But oh, at what cost?"

"Every time I felt myself pushing it orchestrally, I thought of the Sun studio, one-mic, one guitar thing," explains Hawley of this juxtaposition of town and country. "It's all roots music to me, even with a string section, and I wanted to prove that side by side, both work. I think there's a flow to the record - I'm expressing how I feel, truthfully. And when people tell the truth, no matter how ugly it is, it can't help but be a beautiful thing."

Recording took place at Sheffield's Yellowarch Studio, with Hawley and Colin Elliott at the producers' desk.

Remarkably, several songs on the album came to Hawley fully formed and were nailed in just one take. "Last Orders was written in a cab on the way to the studio," he confirms, still slightly disbelieving. "I had a minging hangover, but I had this melody in my head, so I walked in and said 'Mic the piano up and tap me on the shoulder when it's time to record'. We got it in one take. With Wading Through The Water, we were all wearing overalls 'cos we were plastering the studio walls. All I did to change was to wash the plaster dust off my hands... we did that in one take too, and then went downstairs again to get back to work."

In a career that began playing r 'n' b in German beer halls in 1981, Hawley has never been a stranger to toil. His early musical life involved playing guitar for lost indie heroes Treebound Story. He commenced his solo career with a self-titled mini-album in 2001. Recent activities have included producing songs for Nancy Sinatra, who invited him on her UK and European tour in 2005, gigging with his rockabilly band The Feral Cats, and getting over a vicious attack of pleurisy.

In between came the realisation that the music he had always loved - whether Fats Domino, Bo Diddley, Hank Williams, Johnny Cash, Little Walter, or any number of past giants - would be his salvation. "I've been around but I'm not jaded," he says. "I've been through what I've been through, and I've come out of it, quite alright, you know. I don't remember the hang over, I just remember the party. 'Cos there's hope in a beautiful record. Just recently I've come out of the other side of a couple of years of complete shit. People very near me, several of them, got sick. It seemed like every time the phone went someone else had cancer. But when I started recording this record, gradually, one by one, I started getting phone calls saying they were all right. Now I feel quite optimistic, that I can almost believe that I might actually sell some records, and my oddball music might be heard."

As is often the case, blame the parents for just how oddball he is. The son of a Gene Vincent-obsessed Sheffield steel worker, Hawley grew up close to rock and roll - his mum once sang with the Everley Brothers on the back steps of Sheffield City hall, and he later learned guitar via his father. Indeed, his dad Dave once played with Eddie Cochran, and recounts a tale of the doomed rocker standing in a shower at 3am holding an umbrella, "so water wouldn't go in his whiskey". Perhaps this upbringing is why it's so hard to find a comparative voice in the here and now. "There's a lot of factors involved in music today that aren't music," he muses. "But once all the crap is gone, the good stuff's still there. If the core of what you're about is tangible and worth it, and it goes down to your fucking boots, you've got to stick with it because it will stick with you. If the world was just like a fucking Coca Cola advert all the time, all the individual expressions would be denied. So it's good I'm in the position I'm in now. 'Cos I'm not going to be denied anymore."

Now we leave him to play a series of high-profile shows with R.E.M., and to spend his rare free hours searching eBay for the few Santo and Johnny albums he has yet to track down. There's just one last thing to clear up: What is Cole's Corner?" It's where Cole Brothers, an old department store in Sheffield, used to stand," says Hawley. "There's a blue plaque there now. It was a convenient place near a lot of tram and bus stops, and for well over 100 years Sheffield's couples, lovers, friends, mums and dads or whatever, would meet. I've always found it quite a romantic notion - how many kids in Sheffield are knocking about as a result of a meeting at Cole's Corner?' 'I'll meet you at Cole's Corner...' People still say it, even though it hasn't existed for years. It only exists, really, in the ether." Cole's Corner was demolished in 1969. In Richard Hawley's dreams it's still there. You can visit, if you want. Just close your eyes, and listen.

Posted by Blackeyed Donkey at 5:15 PM