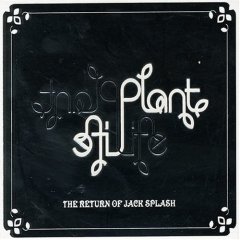 Bored with the constraints of existing genres, Plant Life set out to break down the barriers between hip hop, soul, rock and good old fashioned funk music. In the tradition of legendary funk and soul godfathers like James Brown, George Clinton, Sly Stone & Prince, Plant Life serves up a healthy dose of sensuality and politics while providing a groove strong enough to shake the system to its core. As a member of the Los Angeles based hip hop crew The Animal Pharm, Panda One (the shadowy figure behind Plant Life) helped spread the eclectic sounds of the west coast underground across the globe.

With several EP's and 12" singles under their belt (Including 1996's critically acclaimed "Pharmaceuticals-EP", 1998's underground hit "The Brink", and 1999's starstudded West Coast collab "You Will Lose" featuring Aceyalone, Spontaneous, & DJ Drez) The Animal Pharm decided to take a two year hiatus to work on their solo projects.

Panda One, after gaining critical acclaim for the tracks he produced for The Animal Pharm, as well as tracks for Medusa (Goodvibe), Buffalo Daughter (Grand Royal), etc., decided that it was time for something new. As Panda One explains it, “At first I wasn’t even sure that what we were doing was anything different then what I had always been doing. I just locked myself in the studio with Jack Splash (the lead singer of the group) and we started making what we thought was some progressive hip hop. It wasn’t until we finished that everyone started telling us that we were doing some different shit!”

would it be possible to re-up this album? i can't find it anywhere...thanks!