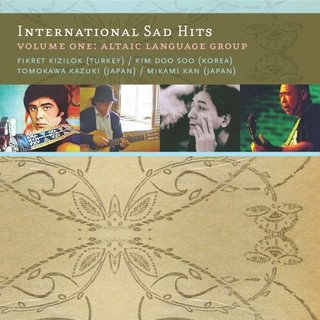 Compilations like this are hard to come by, discs that genuinely have a reason for existing rather than being a lazy collection of music celebrating one thing or another (The Totally Very Absolute Best of xxx Vol.450); it just doesn’t happen often. And that’s exactly why International Sad Hits Vol.1 stands out so much – rather than sloppily throw together a bunch of world music, the album’s curators Damon & Naomi (Damon Krukowski and Naomi Yang) have selected a host of tracks that genuinely hold meaning for them. Almost twenty years of touring (with Galaxie 500 and as a duo) has left Damon and Naomi with more than a sizable collection of musical oddities – the pair are hugely interested in sad songs, no matter the origin, and here they present sixteen tracks by four different artists which take sadness to dizzy new heights. The artists included are Fikret Kizilok from Turkey, Kim Doo Soo of Korea and Tomokawa Kazui and Mikami Kan both of Japan, who are all linked by the Altaic linguistic group. So it’s world music right? You already think you know what it’s going to sound like? Think again – this isn’t the quirky world-pop of the Sublime Frequencies series, or the obscurist Middle Eastern psychedelia which we happily lap up from the Finders Keepers label – rather what we have here are Asia’s most melancholic singer-songwriters in the tradition of Nick Drake. So melancholic in fact, that Kim Doo Soo’s ‘Bohemian’ has been linked to two suicides in Korea – so you know where we’re coming from. These are singer-songwriters unafraid to bear their souls to us, and although most of us won’t know what the hell they’re talking about, the emotion is dripping from each note and each syllable. The compilation opens with Fikret Kizilok’s ‘Just as Long’ which over three and a half minutes sums up exactly the sentiment which is to carry the rest of the record. A delicate blend of Eastern traditional music and Western singer-songwriter traditions, the song is carried by harrowing strings and distinctively plucked guitar, but it is Kizilok’s voice which sticks so firmly in the mind. I don’t understand a word of Turkish but that’s beside the point, his voice is soft, emotive and honest, a far cry from today’s supposed pop emotion. Elsewhere Mikami Kan gives Leonard Cohen a run for his money in the melancholy stakes with the earth-moving ‘Never Before’ and Tomoko Kazuki shows us just how much drama his voice can hold with ‘Kasai Zento’, but really to enjoy this compilation it must be listened to from beginning to end. A hugely enjoyable historical document, this disc shows us an area of music most of us will know only little about and stands up as one of the finest collections we’ve heard in a long while. Grab yourself a box of Kleenex, turn the lights down low and listen to your heart’s discontent – just remember to stay well away from the Jack Daniels. One of the most unique and inspired releases of the year - a massive recommendation.
Posted by Blackeyed Donkey at 7:16 PM

Askinstoo said...
This comment has been removed by a blog administrator.
7:09 PM

Askinstoo said...
This comment has been removed by a blog administrator.
7:53 PM

Can you please repost this album? I will give what you want on my list.

To get my list, send me a mail at:

Unfortunately, I can't send you e-mail (I got the "Delivery Status Notification")

Please, give me an answer...

Thanks a lot Blackeyed Donkey for this link. You have my mail adress, if you're interested in something, mail me (I recently downloaded some Fikret Kizilok stuffs, the Turkish singer on 'International Sad Hits').

Thank you D.B., just heard a song from this comp on WZBC.org (which has some incredible dj's). Looking forward to hearing it and hopefully buying it.