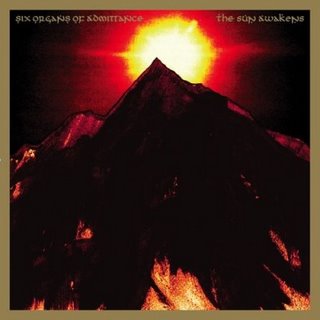 In case you are not familiar with Six Organs of Admittance, it is the solo project of Ben Chasny (Actually, this was his first musical project, it's just that he's now in bands such as Current 93, Comets on Fire, and August Born). He's released his own material under the name Six Organs Of Admittance for 8 years now, and while very talented, he hasn't made a name for himself outside of the West Coast area. That is, until his album School of the Flower came out, Six Organs' most accesible album to date. Keeping the spirit of the last album alive, The Sun Awakens was recorded in a studio (unlike his earlier albums where he borrowed an 8-track recorder), and by doing so, has expanded his sound even further. This is where Ben Chasny absolutly shines, both musically and spiritually. This is music for the soul.

The first thing you'll notice is how clear the production is. Every instrument stands out, whether it's acoustic guitar, reverbed electric guitar, or persian ney. Chasny's vocals have also improved quite well, helping the songs' emotional peaks. Songs such as "Bless Your Blood" and "Black Wall" both have a psychadelic/Middle-Eastern tinge to them, both backed by incredible percussion by Noel Jon Harmonson. "The Desert Is A Circle" is a very relaxing number, showcasing' Ben's incredible overdubbing skills. "Attar" is another shining moment, sounding much like music for a dark ritual.

However, it is the 23-minute epic "River of Transfiguration" where Ben has truely allowed to spread his wings. Beginning with a 6 minute ambient drone full of persian ney, gongs, and tone generators, a snare drum breaks the spell, and thus the song begins. When it all kicks in, you get this feeling of being cleasned and washed away. Visions came to me when I heard this song, such as endless flowing water, sheets of flame, and snow-capped mountains. It truly is a visionary piece of work.
Posted by Blackeyed Donkey at 5:42 PM