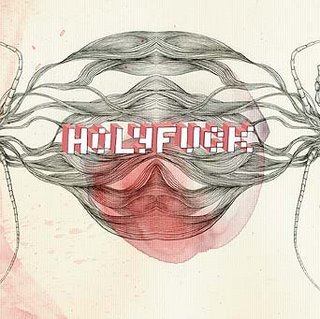 Holy Fuck are creating a legacy based on near stupidity. It’s a simple concept, to mimic modern electronic music without using modern fail-safes like laptops and programmed backing tracks… and of course to make people freak out and smash stuff. So for last year’s NXNE festival they armed themselves with a drum set, a bass guitar, a myriad of toy keyboards, guitar peddles, mixers, and even a 35 mm film synchronizer and hit the stage, without even rehearsing. Luckily they remembered to bring extra batteries.

Now just over a year later they have played super-festivals like Coachella, CMJ, SXSW, POP Montreal, Montreal Jazz, All Tomorrow’s Parties, and Vegoose. They have hooked up and collaborated frequently with Anti Pop Consortium MC, Beans. They still do it with the same duct taped keyboards, film editing gear, still without rehearsing. The line up continues to mutate but maintains its core: Brian Borcherdt, Graham Walsh, Kevin Lynn, and alternating drummers Glenn Milchem and Loel Campbell.
Posted by Blackeyed Donkey at 4:35 PM