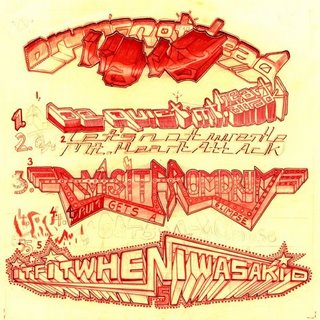 A change in the physical and emotional landscape can have a powerful effect on creative minds. For LIARS, the experience has proved extremely fruitful, expanding their audio-visual ambitions enormously on their magnificent third album.

Berlin's bohemian ambience, low-rent living and vibrant music scene proved both inspirational and liberating for the trio, especially after the costly constrictions of New York. Germany's troubled history and several eye-opening tours of Eastern Europe also became thematic reference points for the album. "It's the idea of dealing with loss or change," says Angus, "how do you recover from that, and what that recovery can lead you to."

The album's title and several track names refer to two fictional characters: Drum and Mount Heart Attack. For the band they are like Yin and Yang, each a state of being. Drum is assertive and productive, the spirit of creative confidence. With two drum kits integral to many of these percussive, propulsive, highly rhythmic convulsions, Drum came to be acknowledged as a fourth member of the band. Conversely, Mount Heart Attack is the reaction to Drum's action, the embodiment of stress and self-doubt. Both became key elements in the creative process.

"Drum means immediate reaction - bang!" Angus explains. "That immediacy is what we thrive on, so the drum in that sense is really positive. The other side is Mount Heart Attack, which is the idea of being unsure of yourself and not having the confidence to act assertively. Really what it comes down to is the way Aaron and I work together. It's not like one of us is Drum and one of us is Mount Heart Attack, it's more like we're both visited by these elements."

DRUM'S NOT DEAD opens in a fog of clanging guitars and martial beats, topped off by the high dreamy harmonies of "Be Quiet Mt. Heart Attack!" Rightly celebrated for their punishing sonic attack, Liars come out with all guns blazing on the dense drones and pulverising rhythms of "Hold You, Drum". Fans of the trio's noisy beast within will not be disappointed.

But Liars also give freer rein than before to their tender, textured, reflective nature on tracks like "Drum Gets A Glimpse", a self-questioning dialogue reverberating around a creaky galleon of ghostly sounds. Equally cinematic is "The Wrong Coat For You Mt. Heart Attack", with its gently off-kilter guitar lines and soothing samples of waves lapping on the river Elbe. After years pushing the envelope of dissonance and distortion, this sudden flowering of supple softness feels almost revolutionary.

"Most of the time these things come to me as a drum beat or maybe a guitar line, and then I'll figure it our from there," Angus explains "This time, on a few of these songs I started thinking: Am I really calling myself a musician when I can't even sit around a campfire and sing a song on a guitar? I really wanted to start tying to do that. A very stripped-down, traditional approach."

DRUM'S NOT DEAD marks a major shift for Liars to rank alongside Brian Wilson's wilder sonic journeys, or Radiohead's embrace of experimental abstraction. Tracks like "Drum And The Uncomfortable Can" build to a symphonic crescendo of brooding, brutal intensity. And yet the album ends with "The Other Side of Mt. Heart Attack", the most perversely conventional and unashamedly beautiful Liars track ever written. The calm after the storm, quietly moving and totally unexpected.

"People know we like to change and what's important for us is the challenge," says Angus. "This time around, the challenge was to really try and simplify and be a bit more traditional, which is something a lot of people wouldn't expect. But for me it's more difficult to make a song than it is to make noise."

DRUM'S NOT DEAD comes loaded with its own cinematic sister project: 36 short films, three for each track, all included on the standard album CD. Angus, Julian and award-winning filmmaker Markus Wambsganss directed 12 each. From backstage travelogues to surreal animation and mini sci-fi epics, Liars document the process of recording, touring, then visually reinventing each track. It's an ambitious and groundbreaking expansion of the CD format, throwing down the gauntlet for other creatively ambitious bands to follow suit.

"It was actually a visual project before it became a musical one," says Angus, who originally founded Liars as a multimedia vehicle at art school in Los Angeles. "We felt strongly about this for a long time. We were always interested in trying to combine music and film."

DRUM'S NOT DEAD began as a response to new surroundings. It ended up as the most diverse, expansive and emotionally naked Liars album so far. This is ultimately a journey that ends well, emphatic proof that sometimes arriving is better than travelling hopefully.

"I moved to Berlin at first on my own," says Angus. "I was literally on my own for a very long time. I think that's what brought me back to this traditional side, and this idea of a movement through periods. I see the end result as being positive. It maps the processes we go through to recover. It's important to get sad and have something bad happen, because it's always going to put you somewhere else."

DRUM'S NOT DEAD is one epic musical voyage from cacophony to catharsis, rich in mirth and menace, the sound of a band redrawing their own creative horizons.