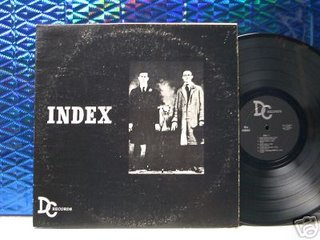 Index are one of the major legends of the private press collector scene, known already in the early 1980s when Greg Shaw reissued it in "Paisley Underground" type re-packaging and kept it in print for many years. The lo-fi sound, amateur vocals and smoke-thick atmosphere have an instantaneous jaw-dropping effect, and it's a good one to play for "square" friends. Incredible primitive surf-garage-psych with off-key teenage vocals and an unreal soundscape; imagine Dick Dale jamming with 1966 Velvet Underground in an airplane hangar after a night of booze & quaaludes. Great band originals share the stage with unparalleled Byrds deconstructions, while some of the feedback and drone passages are bordering on avant noise. A true missing link item bridging the early and late 60s sounds. Beware of the "Index Anthology vol 1" CD as it omits most of the best tracks (the covers) from this. The band formed at the University of Detroit and recorded in Grosse Point, Michigan.
Posted by Blackeyed Donkey at 8:30 PM