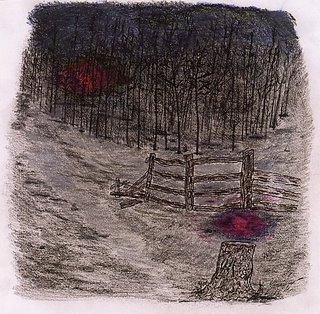 Telepathe is a process-oriented band centered on Busy Gangnes & Melissa Livaudais. Over the last few years in NYC the band has seen a few different incarnations with Farewell Forest focusing on the band’s work last spring as a trio with Allie Alvarado which found them experimenting with chat-laden chaos-fueled-song writing structures. Recorded at their practice on 8 track by nyc-music-illuminati David Sparks and later mixed at Junkyard Audio Salvage this four track EP explores the trio’s dynamics and captures a band at the heights of invention.

It would be fair to describe Busy Gangnes as a percussionist, a songwriter, a composer and as a modern dancer. She has played music for years underground outfits Wikkid, Blood Lines & Greenstreets and as a modern dancer she has worked with Katie Eastburn with her work appearing on the Starter Set Dance DVD which was recently released by Kill Rock Stars. In between her artistic endeavors she instructs yoga specializing in the Atamanda Sequence. Melissa Livaudais is originally from New Orleans and was also in Wikkid. In Telepathe she functions is a guitarist/percussionist/composer/beat-maker. In addition to her work in Telepathe she plays in First Nation (aka Coronation),which will be releasing a 7” on Animal Collective’s Paw Tracks early next year.

Telepathe’s current incarnation finds Busy & Melissa joined by Lane Lacolla and Ryan Licero as they take the ensemble in an organic/electronic direction as they create music which is percussive, syncopated and unconventionally danceable.
Posted by Blackeyed Donkey at 5:54 PM