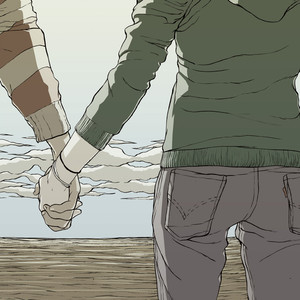 Keith Kenniff mustn’t sleep at all, after releasing the incredible Goldmund album ‘Corduroy Road’ for Type early in 2005 he was already busy at work crafting his second record as Helios; all this while finishing a degree at the acclaimed Berklee College of Music in Boston! ‘Eingya’ is very different from his work as Goldmund, as it incorporates not only his piano playing, but his delicate touch on guitar, drums and his masterful electronic production. It is an album of wordless songs, eleven carefully measured movements, each holding inside it an entire movie’s worth of emotion. Beginning the album on a high with the pastural beauty of ‘Bless This Morning Year’ we witness a showcase already of what Kenniff does best; hearbreaking guitar and piano melodies punctuated by crumbling beats and backed by the most atmospheric synthesizer sounds this side of Eno’s ‘Apollo’. Moving on we are treated to the appetising ‘Halving the Compass’ which blends subtle field recording with the kind of piano melodies so beautiful they could be compared to Virginia Astley or Harold Budd. This is followed by the album’s clear highlight – ‘Dragonfly Across an Ancient Land’; an unsurpassable folk guitar piece with a decomposing percussive background and the sort of melodies that would turn evil tyrants into weeping babies. An album which could as easily appeal to fans of Nick Drake as fans of Boards of Canada or even early Air; this truly has something for everyone. To put it simply – it’s gorgeous.

Posted by Blackeyed Donkey at 4:30 PM

I too like Helios much.
Your video was a nice touch.

Child Without an iPod