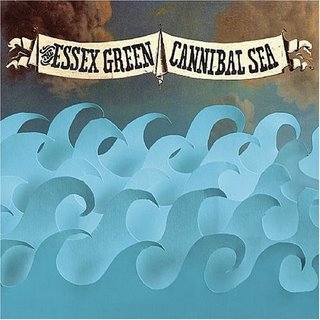 The Essex Green is a band based in Brooklyn NY. For their new album, Cannibal Sea, the band’s three principal songwriters - Chris Ziter, Sasha Bell and Jeff Baron - have assembled a collection of songs that speak to themes of travel, exploration, wanderlust and the desire for quiet niches amid the pressures of big city living. Like the protagonists in the opening lines of Don’t Know Why (You Stay) - “Stepping along the hum of the sidewalk / A marionette, a slave / Your legs are wood and tied to the city / Who has final say?” - the characters from the songs on Cannibal Sea display a yearning to break free of the boundaries and constrictions of city life. To escape the darkness and fatigue, to move on to more lighthearted settings surrounded by water, replete with the spray of the sea, the gentle lift and sway of a boat on the waves.

Cannibal Sea is the third full-length release from The Essex Green, who, though based in Brooklyn, have roots in more pastoral climes such as Vermont and Ohio. Ziter, Bell and Baron share vocal duties across the album and, with the help of some exceptionally talented friends and collaborators, unfurl a diverse range of styles and influences.

Listening to Cannibal Sea is like leafing through a songbook of classic pop. These 12 songs blend the old with the new, incorporating the country rock mood of The Byrds, the Greenwich Village balladry of Fred Neil and the acoustic pop harmonizing of the Mamas and The Papas. Add a little of the pure pop perfection of The Monkees to traces of contemporary artists such as The Shins, The Hidden Cameras and Jens Lekman and you have The Essex Green’s recipe for timeless pop that is classic without being retro. Recorded over the course of a year in several locations in Brooklyn and Ohio, and points in between, Cannibal Sea is The Essex Green’s most cohesive and accomplished album to date.
Posted by Blackeyed Donkey at 5:11 PM