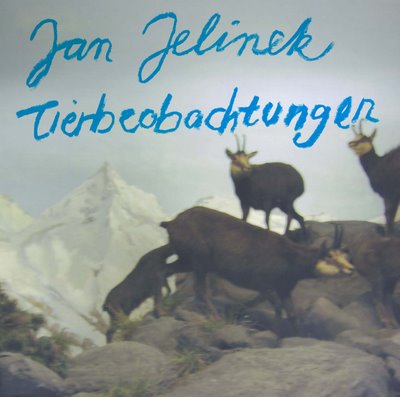 The animal is experiencing a renaissance in music. It provides a reflective surface for our notion of the unbridled and irrational, of that Other the philosophers Deleuze/Guattari - as part of their ‘Animalisation’ - called the embodiment of artistic deliverance. And yet, how much of a liberation can art actually tolerate? To what extent can music truly throw off its fetters without descending into chaos?

Jan Jelinek’s new album title provides a first hint of this development: like the above, ‚Tierbeobachtungen’ (animal observations) deals with the issue of release and liberation. Recorded almost in transit, while preparing his move to a new studio, the tracks reveal and relish in their improvisational character, a drifting lost in sound, yet never lose sight of their underlying structure. ‘Tierbeobachtungen’ might constitue Jelinek’s freest and most personal work. Simple arrangements with tracks based on four to five layered and modulated loops, while his own studio equipment provides the main sampling sources, from synthesizer and guitaret to vibraphone. And, not least of all, more than any of his previous albums, ‘Tierbeobachtungen’ picks up on Jelinek’s live appearances.

Nevertheless, Tierbeobachtungen’ steers clear of all animal emulations, does not succumb to the myth of the wild and unfettered, but merely – as the title implies – aims to observe. The tracks’ intoxication never exhausts itself in unbridled expression - the observer’s post, a level of reflection, remains audible throughout. On the other hand, this is by no means intellectual, distanced music. On the contrary: Jelinek leads us straight into a thicket, an acoustic jungle where sumptuous splendour meets the uncanny. A long tradition of psychedelic music pervades the recordings – Amon Düül, Cluster, My Bloody Valentine … yet whatever musical memories might vie for our attention, these are no clear-cut references, just loose associations. Jelinek side-steps the overly tangible.

All tracks pursue a common principle. They well up slowly, a period of concentration, of taking shape, followed by equally rapid dissipation. On occasion, we might even be tempted to take them for field recordings - gems discovered, stored and returned from their travels by ethnologists fifty or a hundred years ago. Jelinek’s tracks provide tantalising glimpses of acoustic treasures from faraway lands, without ever divulging their true heritage. Similar to the pioneers of industrial music, like Cabaret Voltaire or Zoviet France, who back in the early 1980s experimented with field recordings to challenge western listening habits, ‘Tierbeobachtungen’ takes us to new, unknown territories and brims with sounds that defy geographic or stylistic classification, not unlike the semi-conscious state between dream and awakening, always a little cryptic, yet never overly romantic. Overt romanticism is also precluded by Jelinek’s sense of humour, which rears its head in titles like ‚Palmen aus Leder’ (palm trees of leather) and prevents us from taking the album’s mystic overtones too seriously.

Since the 1990s Jan Jelinek has been working with sounds as a musician, producer, using various pseudonyms for his many projects. Releases under his own name include the albums ‘Loop-Finding Jazz Records’ (scape, 2003) and ‘Kosmischer Pitch’ (scape, 2005), the latter a drifting loop vortex peppered with subtle Kraut references.
Posted by Blackeyed Donkey at 5:23 PM