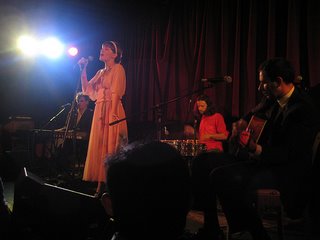 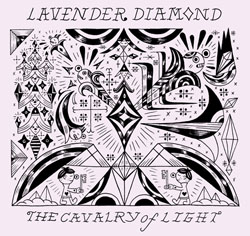 Rarely does a self-released demo CD garner the attention and praise that Lavender Diamond’s The Cavalry of Light has this year. Based in Los Angeles, Lavender Diamond is a meeting of disparate yet surprising cohesive creative forces: front women Becky Stark, guitarist Jeff Rosenberg (of Tarentel and Young People fame), keyboardist Steve Gregoropolous and percussionist/established visual artist Ron Rege Jr. In contrast to Rosenberg's prior noise-filled endeavors, and even to Stark’s sparse and spooky solo work, Lavender Diamond make lush, straightforward chamber/folk-pop that manages to stay just this side of saccharine, basking in confidence and sunny melodies. The four-track, 16-minute The Cavalry... has catapulted Lavender Diamond to the forefront of LA's folk scene, earning them a spot at ArthurFest, and opening slots for everyone from Scout Niblett to Deerhoof.

Opener and standout track “You Broke My Heart” showcases Stark’s voice above a staccato piano line, mild acoustic guitar, and pounding drums. As Stark’s register goes higher and higher, the music remains understated in the background, content to let Stark carry the song. The fleshed out arrangements, which often include a four-piece string band, suit Stark’s voice to a tee, bringing out a vaudeville quality that might not exist in separate circumstances.

Lavender Diamond could easily draw comparisons to a number of AM-radio mainstays: Shirley Collins, the Carpenters, Joni Mitchell. “Please” in particular sounds out of time; its waltzing piano and warm strings sound nostalgic without sounding retro, a feat accomplished in large part by Ms. Stark’s delivery, which could stand up to any of her aforementioned predecessors. A large claim, to be sure, but that is just the sort thing The Cavalry of Light hints at.

“In Heaven There is No Heat” is the closest thing on The Cavalry... to Stark’s solo work, and the only vaguely psychedelic moment on the record. Where alone Stark would be content to repeat the song’s title ad infinitum in verse, here the song moves into the biggest and catchiest chorus on the record. While lyrics like “Dream the kind of life you will find, the kind of love that lasts forever” sound cliché on paper, the earnestness of Stark’s vocals and the no-frills accompaniment of her band are truly engaging, if not a little refreshing.

The pastoral “Rise in the Springtime” brings the disc to a close with a British-folk flavored mini-epic, ending with a buildup of marching drums and swirling strings. As Stark repeats “We rise... We rise,” one can’t help but think it might just be prophetic. Lavender Diamond has the potential to woo the world.

Posted by Blackeyed Donkey at 5:43 PM

can you update the link for this album? it would be greatly appreciated! thank you.